We’re once again evaluating teams that are on the 11 seed line or better from BracketMatrix, with a couple disclaimers. The data was compiled Thursday, so the teams evaluated were from Thursday’s BracketMatrix. Only a couple of teams have changed and they’re probably not contenders anyway.

Odds were gathered on Friday morning from 5Dimes. 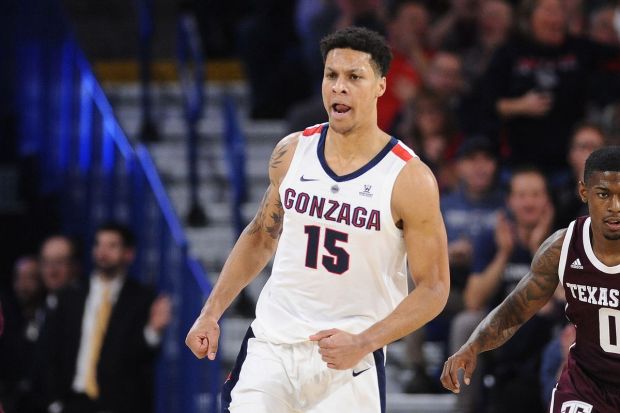 The Blue Devils remain the prohibitive favorite and have risen up the FFI after two weeks of padding stats against a weak part of the ACC schedule. We’ll see where they stand after two much more challenging weeks ahead.

The Zags are spending January and February maiming teams semiweekly once again. KenPom has them pegged as the best offense in the country and that’s been without a fully healthy Killian Tillie all year. That’s the good news. The bad news is that Tillie may not ever be fully healthy this year, as he sprained his foot on Thursday night.

I don’t know, maybe this blog moves markets after all. They were in the “Highly Undervalued” section two weeks ago, have lost three games in a row (two of them as heavy favorites), and yet the odds have only gotten shorter. The Illinois game – along with the Florida game earlier in the year – has to make you nervous as a Spartan backer. If MSU has to play a team that forces a lot of turnovers in the tournament, it could be another early exit for Tom Izzo’s group.

If you’re looking for a difference between this year’s Virginia team and last year’s, look no further than the offensive numbers. They were Top 25 in efficiency heading into the tournament in 2018, but just barely. This group is currently Top 5 and it has a lot to do with their increased ability to create second chance opportunities. They don’t put up huge point totals, but there’s no need to worry about that, the Cavs dictate pace 99% of the time.

The Vols were an elite defense last year, but the offense was always lagging behind. Weirdly, the roles have reversed this season despite returning basically the same roster. If you’re looking for a reason to back Tennessee, that would be it. This group has shown the potential to be Top 5 on both ends of the floor for an extended period of time. It’s reasonable to think they can do both for a six-game stretch when it matters most.

Shooting is still the big question mark for the Wolverines as it stands now. They had a good effort on the road at Rutgers, but it’s just one game against a team that won’t be playing in any postseason tournament.

UNC seems to be flying a bit under the radar with the rival Blue Devils stealing seemingly every national headline, but they’ve quietly beat a couple of really good teams by comfortable margins lately. There’s not a lot of holes on this team and they may get Sterling Manley back soon to give them another big to bring off the bench.

Everything is going wrong right now for the Jayhawks and they’re a tough horse to back with the uncertainty surrounding Lagerald Vick’s leave of absence.

The Hokies can be really good when Justin Robinson comes back healthy, but you’d like to see them do it against the best teams in the ACC before you feel like they could sniff a national championship.

Austin Wiley just came back, so we’ll see if he can help out the Tiger defense in a significant way. It’ll be interesting to see how Auburn does in upcoming road games at LSU and Kentucky. Their “signature” win right now is Washington.

The exciting non-conference season the Bulls had has lost its luster quite a bit at this point. Winning at West Virginia is no longer even a Quad 1 win. They still don’t have any overly damaging losses, but they’ve put themselves in a position where another loss or two might force them to win the MAC Tournament.

As expected, Louisville just keeps getting better, and their odds have dropped from +12500 two weeks ago and have moved up eight spots. They’re up to a 4 seed in the Bracket Matrix and they’ve got quite a few opportunities for more big victories.

Not to get too Bill Simmons on you, but the Noles are either the worst good team out there or the best bad team. I haven’t quite figured it out. They just crushed Syracuse in the Carrier Dome, but it was the first impressive thing they’ve done since November.

Houston hasn’t had the most impressive offense, but based on history, there’s reason to believe that will keep improving under Kelvin Sampson. There’s also the last month, where they’ve risen over 20 spots in KenPom’s offensive efficiency rankings. The general public probably won’t give their win at UCF the respect it deserves, but it was super impressive the way they controlled that game.

The defense is slowly improving for the Tigers, but still has a ways to go before you could feel good about them going on a run in March. They’re 8-1 and well positioned in the SEC, but they’ve got a really tough five-game stretch coming up

I have no idea why the odds have gotten shorter on the Sooners. They’ve lost three in a row and haven’t looked good in any of them.

The Huskies are the only legitimately intriguing Pac-12 team, but they still haven’t beaten anyone that’s going to be an at-large in the tournament.

I’m editorializing a bit here, but should probably do even more editing. The Huskers appear to be a lost cause without Isaac Copeland.

The Bears are the epitome of an 8/9 seed that has quite a few flaws, but might mess around and beat a 1 seed if they get the right matchup.

The Knights have some good players and are capable of beating a lot of teams, but they’re not the most consistent group on either end of the floor.

They scored 24 points in a game. Disqualified.

Making the tournament will be a win for the Frogs after all they’ve endured.

The Johnnies feel like a team that’s either going on an unexpected run or getting bounced immediately from the tournament. Ponds and Heron are the type of combo that have the ability and confidence/cockiness to terrify opposing fans late in a close game.

The Rebels are headed in the wrong direction.

Wofford’s destiny is to be the 11 seed that 70% of people take to beat the 6 seed and then they actually do. Think 2018 Loyola, 2017 Rhode Island, 2016 Wichita, 2016 Gonzaga, etc. Are you really gonna bet against a team that has guys named Fletcher Magee and Storm Murphy in their backcourt? I didn’t think so. Some things are just meant to be.

Minnesota’s all over the place, but could be a scary opponent for a team with a limited frontcourt.

The Buckeyes are not very threatening. 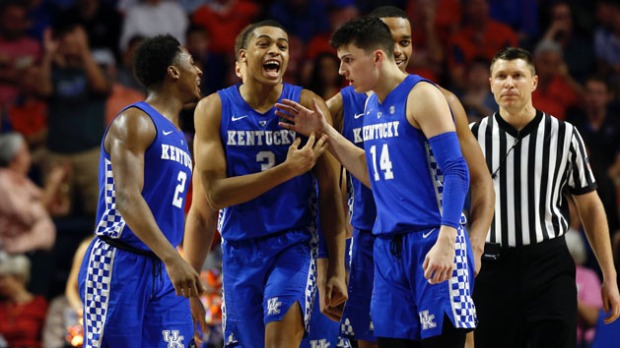 I still disagree with the rankings, although the Cats continue to rise. 6th might be a touch high, but who has been better over the last few weeks? They’re not a great shooting team, but it’s hard to find many other holes to criticize them for.

Purdue’s won a lot of games lately and improved quite a bit, but it’s hard to survive in a three-point world when you regularly get burned from the perimeter. Generally, the Big Ten isn’t a great shooting league, so they can contend for a conference championship. But they probably don’t have enough to be a legitimate contender nationally.

Marquette seems to get a lot of love from national media, but their best win away from home was Louisville on a neutral when Louisville wasn’t nearly as good as they are now. They’ve played pretty well recently, but people seem slow to realize the Big East isn’t the conference it has been in recent years.

The Bearcats just haven’t played enough good teams to have much of an opinion. The one game that stands out on the resume is a loss at ECU, which is probably only a result of me betting on them that game. But we’ll get to see them play Houston Sunday.

If Arizona State makes the tournament, we need to reduce the field. They’ve lost to five teams outside of the Top 100 of KenPom. They just lost to Wazzu by 21 AT HOME. That’s absurd. 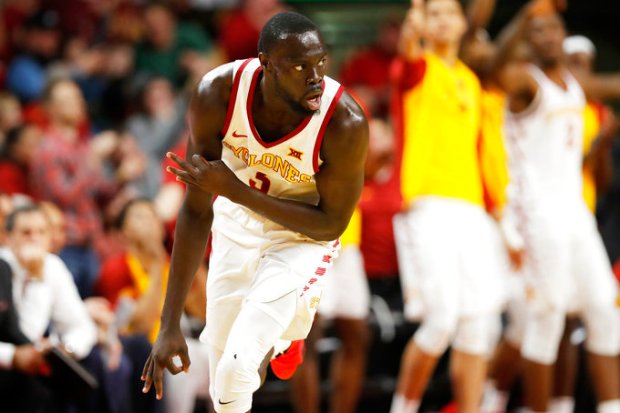 The odds have changed considerably since they were featured in the “Highly Undervalued” section a couple of weeks ago. They were +6500 in the last edition. I’m not sure they can actually win the thing, but they can go on a run and leave some great opportunities for hedging. The 5 seed they’re currently slated for isn’t ideal, but they’ll shoot up the seed list if they keep playing well.

The Terps might not be the sexiest pick, but they’re pretty solid all-around and they’ve got some future pros in the lineup.

The guards are good, but they won’t be able to do anything until they commit to doing it on the defensive end.

More athletic and talented than skilled. 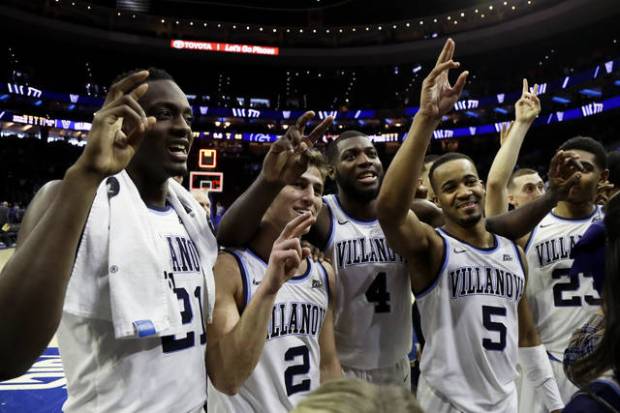 It’s not fun to be on the opposite side of Jay Wright anymore, but Nova still has a lot of strides to make defensively and it’s not like they’re an unstoppable juggernaut on offense. They haven’t played a Top 40 team for two months.

I wouldn’t count them out, but the biggest difference between this year and last is perimeter shooting. They miss shooters Kendall Stephens and Hallice Cooke to work off of the Martin twins. Jazz Johnson has filled in some of that hole, but Corey Henson has been streaky and Nisre Zouzoua has been a dud after shooting 36% from three at Bryant. And they still miss Lindsey Drew. Drew was out for the NCAA Tournament last year, but not having his ability to set people up is noticeable and pretty much just leaves Cody Martin to do all of that work.

Syracuse isn’t good, but they’ve overperformed recently when they’ve made the tournament, so I’m afraid to totally shit on them. 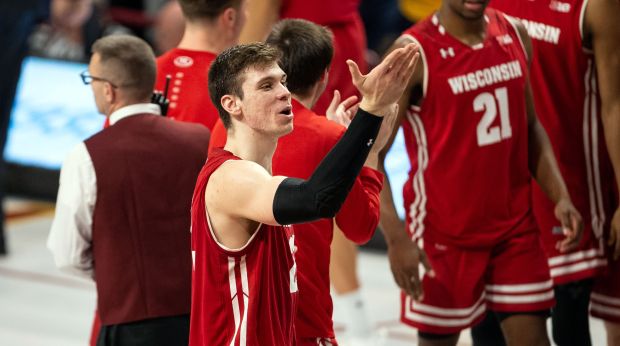 I have my doubts about Wisconsin winning it all, but they will absolutely defend their ass off against everybody and they still have an All-American on their roster. D’Mitrik Trice can hit some big shots and the Badgers are just generally irritating to play against.

They have to outscore everybody they play, but they’re good at it, and if they make it to the second weekend you can start hedging off a huge number here.

The Longhorns are just a really solid team that has had some trouble closing close games away from Austin. They’ve got talented guards, but none of them are destined to win the shooting game for the long haul. 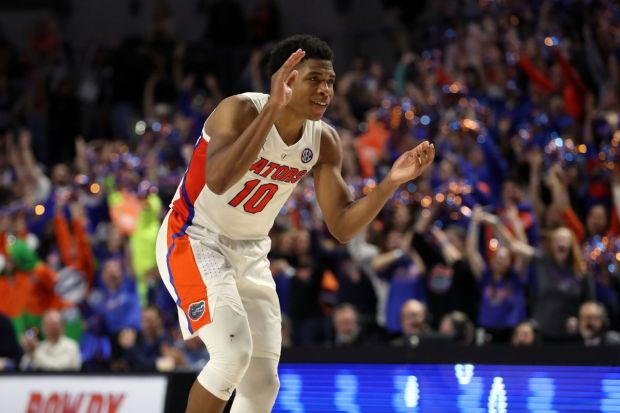 Still not great at the “winning games” part of making the tournament.

There’s no evidence that they’re good.

They can score, but they’ve given up even more to a very mediocre Big East schedule.

They’re not all Ja Morant, but of the quality mid-majors, they’re the most star dependent.

The home loss blowout to Wofford was telling.

Only remotely quality win without Bol Bol is Arizona.

As I wrote this blog, they were in the process of losing to St. Joseph’s by 30.

The Aggies are pretty solid and they don’t have the typical mid-major problem of lacking size. Making the field is their biggest obstacle.

VCU will defend their asses off, but they can’t score to save their lives.