There’s a lot of hype around the Tigers this year, but I can’t fully get on board.

The offense has QB Brady White back and a couple of his best receivers, but they also loses three multi-year starters on the O-line. They also lose RB Darrell Henderson. I feel like it’s getting a bit overlooked because his backup – Patrick Taylor – is back and he ran for 1,100 yards himself. But Henderson was different. He’s averaged 8.9 YPC each of the last two years. His two years as the lead back gave them rushing efficiencies way beyond anything they’ve had in the Norvell/Fuente era.

The defense returns eight starters and 11 of their top 12 tacklers, but they’ve had plenty of continuity the past few years and things have stayed relatively the same, if not gotten worse.

The Tigers also have three new coordinators. They all have good backgrounds, but still.

The schedule isn’t very difficult, but they do have six road games. Seven of their nine losses have been away from home the last couple years. Compared to most teams, the offense still traveled well last year, but the 34 PPG away from home was still 17 less than when they play in Memphis.

The Cougars are the epitome of a half-team. The offense is going to be must-watch TV and so is every offense going against the UH defense.

The big news of the offseason  was that Houston threw a boatload of money at Dana Holgorsen. Holgs has proven himself to be a high-level coach, but he didn’t exactly bring the highest level of coordinators with him. DC Joe Cauthen did a pretty good job at Arkansas State, but not a good enough one that makes you feel like he can totally turnaround this mess of a defense in one year.

The schedule is pretty tough. They open at Oklahoma and they draw both UCF (in Orlando) and Cincinnati out of the East. They also have to play Wazzu in Houston, but at the Texans stadium. While the schedule is difficult, it’s hard to count them out of any game with such an explosive offense.

The offense didn’t deliver as expected with Sonny Dykes running the show and an experienced QB behind center, but that’s not to say it was bad by any stretch. Now they add in Texas transfer Shane Buechele and all of the receivers are back.

The defense made a ton of strides last year from an efficiency standpoint and it’s hard not to see that continuing with nine starters back. They’re expected to have seven senior starters.

A brutal road schedule restricts the high-end potential in terms of record. The Mustangs will travel to TCU, Memphis, Houston, USF, Arkansas State, and Navy.

I spend a lot of time writing about returning production, key players, schedules, transfers,and a whole bunch else, but sometimes you just gotta believe in a coach. I believe in Willie Fritz. 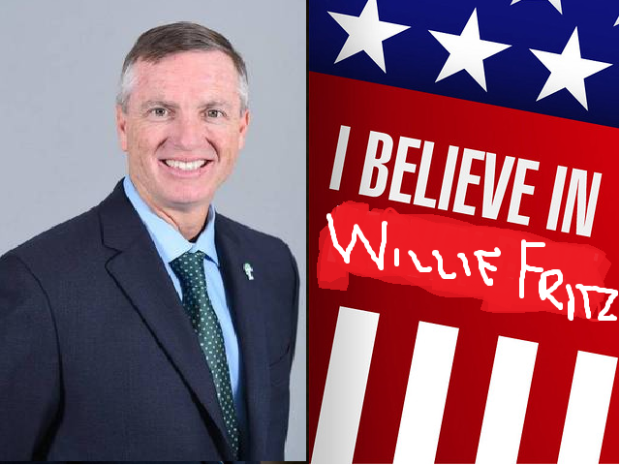 Fritz then led the Georgia Southern program into the FBS level. His first year there – GSU’s first year in the FBS – he led them to an 8-0 record in the Sun Belt. That’s the first and only time a program has gone undefeated in conference play during their first year.

Now he’s at Tulane. He took over a program that was coming off back-to-back 3-9 seasons. He’s led the Green Wave to 4-8, 5-7, and 7-6 seasons. That seven win season last year was just the third time it’s happened in the last 20 years at Tulane.

So the belief is warranted and this team looks primed to keep growing. The entire backfield is back, including QB Justin McMillan. The former LSU transfer took over last year when his team was 2-5, started the last six, and led them to a 5-1 record. He’s also got his top receiver back and they add in Oklahoma State transfer Jalen McCleskey, who had 1,865 receiving yards and 19 total TDs during his time in Stillwater.

They lose two starters on the O-line, but add in an All-Ivy league grad transfer from Brown and a 6-7, 325 behemoth transfer from Virginia that has played a decent amount.

The defense was super young last year, but somehow moved up over 50 spots in the S&P+ rankings. They had 41 sacks last year and 33 of them are coming back. Only Cincinnati may be able to claim they had a better D-line last year, but the Bearcats lost three starters, while the Green Wave front remains intact.

The secondary loses a couple of All-Conference guys, but their replacements got plenty of experience last year and produced a ton considering they were backups.

Tulane isn’t gonna win at Auburn, but every other game on the schedule is within reach. They have to travel to Memphis, Temple, and Army. All tough games for sure, but they beat Memphis by 16 last year and proved their mettle on the road last year by rolling USF by 26.

It’s a scary time for Navy football. They’re coming off their worst season in recent memory, they have very little production coming back, and their two service academy rivals are expected to have big seasons.

All is not lost though. The record stunk last year, but it was a little unlucky. They lost four close games and the schedule was more difficult than it will be this year. Malcolm Perry is back at QB. New DC Brian Newberry put up unfathomably great numbers as Kennesaw State’s DC and may be able to get the defensive ship steered back in the right direction.

Tulsa’s wins by year over the past decade: 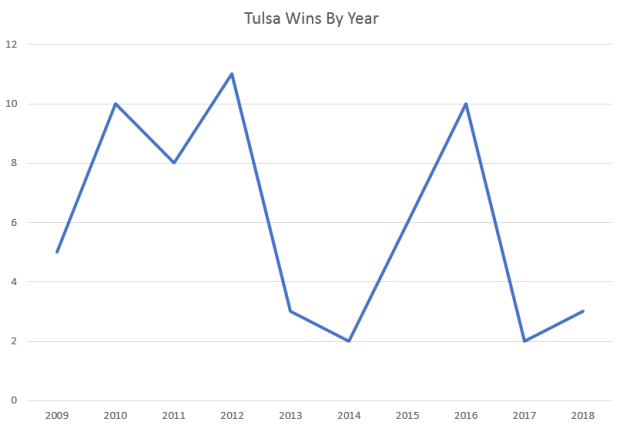 You figure it out.

I don’t love anything here, but I think only four teams – UCF, Cincinnati, Houston, and Memphis – probably have a realistic shot at it and the more I look at schedules (and talent), all roads lead back to the Knights.

They avoid Memphis out of the West and get Houston at home. They do have to play at Cincinnati this year, which you would think gives the Bearcats the advantage to win the East division. However, Cinci has to play both Memphis and Houston on the road.